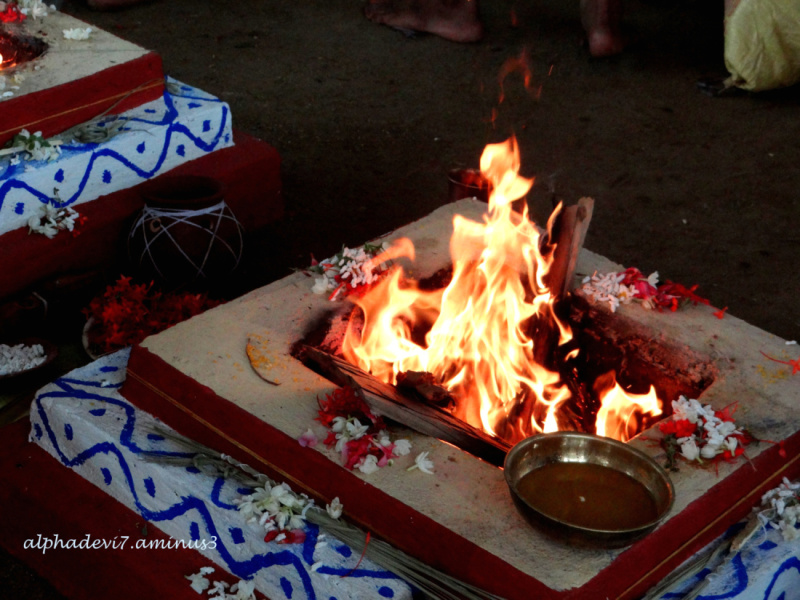 Previous Next
← previous day next day →

It is for the Fire Deity

Posted by Devi (Chennai, India) on 24 May 2013 in Lifestyle & Culture and Portfolio.

One of the five elements is Fire. Through Him, we reach things to the Sun too...both representing heat and flame. Offerings are made to the Fire that is lit in small pits.Worship of the Five elements are important for us.And so is worship of the planets. The herbs that are used to light the fire and keep it going are medicinal and they have been proved ( scientifically) to eliminate pollution in the air.They kill the bacteria . The smoke that arises from the fire here cures ailments too.Way back, when there was with tragedy in our country in an Industrial city when thousands died after a gas leak in a factory, in the homes which were having this Fire worship no one was affected . Yes, there are among us a few who have this done every day in their homes in a small way without the big pit. And they become immune to several health hazards. These families are called Agnihothris- Fire worshippers. Generally the Homam or Fire worship is done for the welfare of the world. Each time the Priest offers something to the flames, he says "Idham na mama.." in Sanskrit meaning "this is not for myself .." Yes it has no - it SHOULD have no, self interest:-)))There will be a lot of Fire Pits in the hall where they perform this.

Once again, an interesting description of the picture.

gerard1948 from Somewhere on earth, Spain

A beautiful picture, very well explained. A superb framing, and a very beautiful capture of the fire. Thank you for sharing.
Have a nice day.

@gerard1948: Thank you gerard for the appreciation. Have a great weekend :-)))

Very interesting and a superb picture .

A beautiful lesson today Devi, I like the element of fire, do you do this every day?

@Kate: I don't do this Kate. Only during some special poojas (rituals), we do this at home. But there are families who do this everyday. I shall post shortly, the photograph I took of a Fire Yogi ( last month) ...who by chanting, has raised his body temperature above ignition point and hence is not scalded by fire. Shall give a small write up too:-)))

The purity of fire - lovely composition and colour with interesting information.

Excellently described and made photo! :) I love the way you manage your blog. Have a nice day!

Do you know what the herbs give off?

@CElliottUK: Chris, Different types of herbs, small pieces of wood ( cut from trees like mango, Fig, red sandal wood, Banyan etc.) sugar and ghee etc. etc, are added to the fire originally started by using dry cow dung, mixed with hay and shaped like plates and dried. To my little knowledge... the smoke that arise from these give rise to some gaseous products( like thymol, eugenol, pinene, camphor etc.) and helped by radiation from the sun, it is said these kill the bacteria. And added to this are the chants that are made by the priest which send sonic waves.A combination of the smoke rich with positive curative chemical vapours and the sonic waves clear the air and spread positive and curative charges into the atmosphere.

Thanks for your explanation! Interesting! Awesome! Greetings! Adela

@Adela Fonts: Thank you for the appreciation Adela :) Have a great weekend:-)

Beautiful image of this Holy Fire, Homa Kundam.
And very interesting information. I love your response to the comments above.
Amazing presentation Devi. Love it. Some valuable explanations on the rituals ... :)

@Sam: Thank you Sam:) Around twelve years back, on my husband's last posting at Trivandrum before he retired, the Yoga centre where I was learning yoga, had arranged a demo. on Agni worship in the homes every day before sunset and after sunset.I attended this. This was the simple one like the Agnihothris did in Bhopal. Each of us was given a small homakundam made of copper in the form of a trunkated pyramid and taught the Chants on Agni and Sun. once we moved over to Madras, somehow this never got started . Initially it was due to not getting varatti..( I should say, not making a sincere effort to get )and later it somehow just stopped!! Thank you again Sam:) I am grateful :-)I love to know the cause and effect of everything under the sun !!! Insatiable dhaaham , I should say !!!

I like to watch a fire but I am steady earth person myself. :)

So warm!
So beautiful
Great details, fire, colors
Looks so tasty!
Thanks for sharing

@helys: Ah!! Thank you so much for the comments helys..I am grateful:-)

Lovely image and you are teaching us so much, thank you Devi

@Doug: Thank you Doug :-)All your responses here encourage me to :-)))

A beautiful image of the flame which seems alive. A wonderful account of this ceremony and its many benefits.

@Steve Rice: Thank you for the appreciation Steve :-)

Great effect for the fire :-)!

Devi, that is all amazing, interesting and you go through such a work to tell us about your traditions. I find it fascinating. - My husband shares it too ........ and thanks for your sharing the pictures.
Have a great evening - Monika

@Shiva: Thank you Monika..I value traditions ,though accept modernity too. Happy to see your positive response :-)))))My thanks to your husband too...

I like this and reports that tell us that we do not know your religion well!:-))Halelja.

Happy weekend to you ,my friend!

flowers and fire!! But beautiful....

This image has been featured in 1 Remix collection.